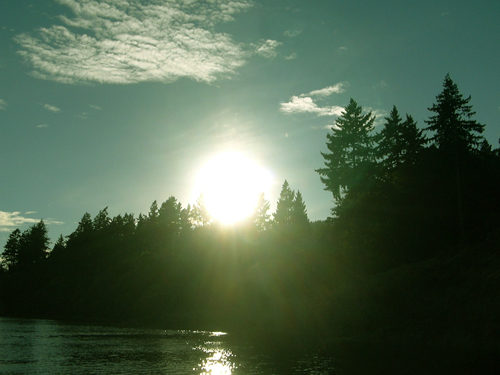 The fact was that all of my friends did it, staring at the sun that is. We would sit on the grass in the vacant lot behind my house, the lot that used to have that weird old house that was haunted until it burnt down, and there we just laid and stared, having contests to see who was the toughest and had the biggest staying power. After we couldn’t take it anymore, we would ram our fists into our eyes and watch as everything faded to black.
In that darkness, we would sound out in a collective gasp as the psychedelic colors and patterns gradually filled our horizons, making a pixilated bitmapped show play out inside each of our eyelids that would make it almost impossible to see for almost an hour after we’d stopped doing it. But really, who didn’t want to do what we were doing? A kid with glasses at my school said we’d go blind if we rammed our fists into our eye sockets, and he had seen that on TV or something, or his dad was a doctor or some thing, and all us kids wanted to listen, because, between that kid and my mom, I had two people who told me that I was going to go blind, but I didn’t think either of them were right, because no-one I knew was blind, although, one of my friends had no depth perception and was always riding his bike into power poles as he raced down the sidewalks in our neighborhood. But he was a retard, or that’s what my older sister said his sister said anyway. She had also told her brother that if he held his hand up to his face and it was larger than his face, he was a Mongoloid, and apparently, that was the same thing as being a retard, and it made sense to me, because it was a reason, and that’s all I wanted. A reason.