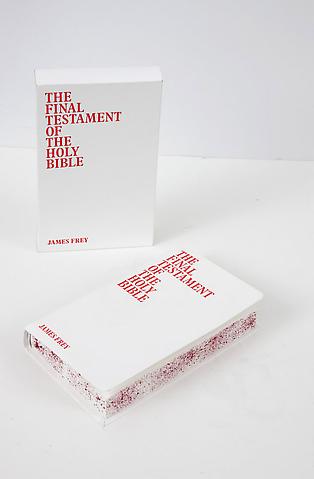 James Frey. People love to hate him. People love him. He’s polarizing. I’ve never met anyone who is indifferent to him. He is the author of one of my top five books of all time (an always changing list though… but he’s been in there for a while), Bright Shiny Morning. I loved that book. Read it twice in a row. Sat in my backyard and drank gin and tonics and smoked my pipe and read into every single word like it had some kind of hidden meaning. Was wrapped up in the story… completely.
I loved that book because it made me think… So when I saw that he had a new book out, I was immediately excited to see what it was like. What story it would tell. How far would I fall in love with it in how little time.
I was excited. I couldn’t wait…

James Frey’s newest novel, The Final Testament of the Holy Bible, is a story about Christ’s return to earth. In the here and now. In modern times. In the inner city that is New York and its outlying sprawl.
The novel is told through the life and wanderings of the main character, Ben Zion, a troubled and unloveable Christ figure with a penchant for rampant and flagrant tantric sex, a love for hanging out with loonies, a constant communication with God during regular demobilizing seizures, and living like a bum in New York’s subways.
In The Last Testament…, Frey weaves an awkward and repetitive story about Zion’s life, obliquely copying the bible for the novel’s framework. Persecution. It’s here. Double crossing. Here. Blind faith. Here. It’s like a Bible checklist. Without the final cross finale and ultimate resurrection. Instead, Frey adds lots and lots of drugs and sex and video games and guns and hookers and all sorts of nasty shit that overall reeks of just being m’eh.
Part of the awkwardness is that each chapter is told from a different character’s view. Some are relatives. Some are friends. Some are acquaintances. Some ape the apostles while others are veiled persecutors. And each time I started a new chapter, I hoped that the book would finally get going. Like really going. Usually in this book, I just wanted to skip chapters. Some of the narratives are just plain boring.
I like looking forwards to reading a book. I love sitting down and getting ready to read, anticipating the story that I’m about to take in. Unfortunately, reading The Final Testament of the Holy Bible, I never felt this. Usually I was annoyed. I rarely liked or disliked the characters. I didn’t care for one chapter over the other. Was constantly in confusion because of the consistent repetition that made me feel like I’d already read certain chapters before I already had.
Frey is the king of repeating himself. Usually it works. In this novel, it’s a little like blind groping in a dark basement when you’re too young to know any better. Frustrating. Not leading to anything. Not knowing where it’s going. Tedious after a while.

Even with this book, I still love Bright Shiny Morning, and hope that it’s not his only opus.
I can only hope…
Better luck next time.